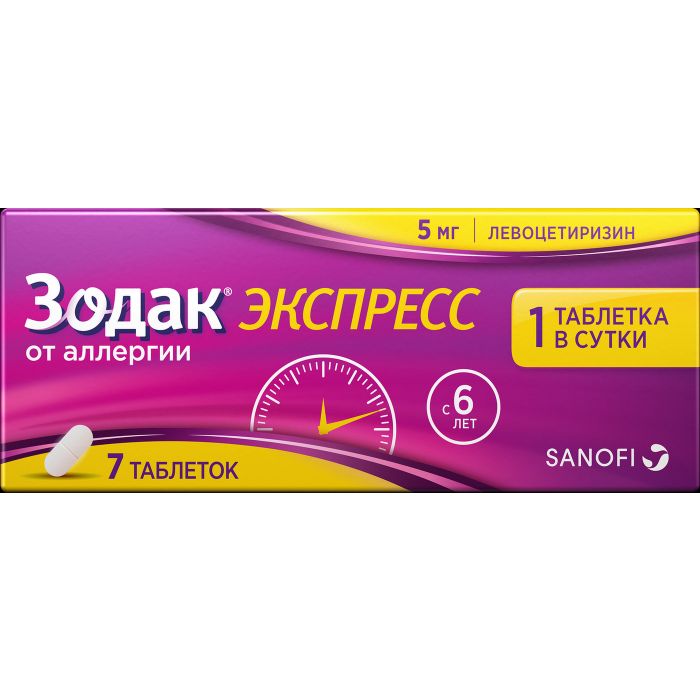 Oblong biconvex film-coated tablets, white or almost white, with an e" engraving on one side.

Levocetirizine, the active substance of the drug, is the R-enantiomer of cetirizine, a powerful and selective histamine antagonist that blocks H 1 -histamine receptors.

Levocetirizine affects the histamine-dependent stage of allergic reactions, and also reduces the migration of eosinophils, reduces vascular permeability, and limits the release of inflammatory mediators.

Levocetirizine prevents the development and facilitates the course of allergic reactions, has an anti-exudative, antipruritic effect, practically does not have an anticholinergic and antiserotonin effect.

In therapeutic doses, it practically does not have a sedative effect.

After oral administration, the antiallergic effect of levocetirizine continues for 24 hours.

After oral administration, the drug is rapidly and completely absorbed from the gastrointestinal tract.

Food intake does not affect the completeness of absorption, although its rate decreases.

In adults, after a single dose of the drug in a therapeutic dose (5 mg), the maximum concentration (C max) in the blood plasma is reached after 0.9 hours and is 270 ng / ml, after repeated administration at a dose of 5 mg - 308 ng / ml.

Equilibrium concentration is reached after 2 days.

In small amounts (< 14%), levocetirizine is metabolized in the body by N- and O-dealkylation (in contrast to other antagonists of H1-histamine receptors, which are metabolized in the liver by the cytochrome system) to form a pharmacologically inactive metabolite.

Due to the insignificant metabolism and the lack of metabolic potential, the interaction of levocetirizine with other drugs appears to be

in young children, T 1/2 is shortened.

About 85.4% of the taken dose of the drug is excreted by the kidneys unchanged by glomerular filtration and tubular secretion

- other allergic dermatoses, accompanied by itching and rashes.

At a temperature not higher than 25 degrees.

Hypersensitivity to levocetirizine, cetirizine, hydroxyzine, and others

glucose - galactose (due to the content of lactose in the preparation).

The tablet should be taken orally without chewing and drinking a liquid, regardless of

It is recommended to take the daily dose at one time.

If after treatment there is no improvement or new symptoms appear,

it is necessary to consult a doctor.

specified in the instructions.

doctor before using the drug.

In elderly patients with moderate renal impairment and

alternative treatment cannot be prescribed, the dose should be adjusted to

depending on the CC value, since levocetirizine is excreted from the body in

mainly by the kidneys.