Verospiron
Skip to the end of the images gallery 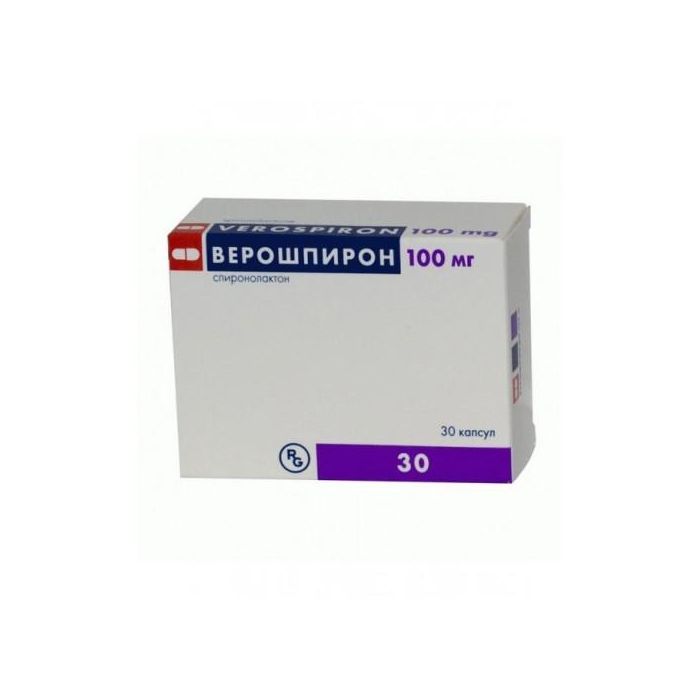 Spironolactone is a potassium-sparing diuretic, a specific antagonist of aldosterone (mineralocorticosteroid hormone of the adrenal cortex) prolonged action.

Increased urine output due to the presence of a diuretic effect, which is unstable diuretic effect manifests itself on the 2nd – 5th day of treatment.

When taken orally, it is rapidly and completely absorbed from the digestive tract. It binds to plasma proteins by approximately 98% (canrenone - 90%). Tmax of canrenone in blood plasma - 2–4 hours. After daily intake of 100 mg of spironolactone for 15 days, Cmax reaches 80 ng / ml, Tmax after the next morning dose - 2–6 hours. Vd - 0.05 l / kg.

Spironolactone is converted into active metabolites: a metabolite containing sulfur (80%) and partially into canrenone (20%). Spironolactone penetrates poorly into organs and tissues, while it and its metabolites cross the placental barrier, and canrenone passes into breast milk.

With cirrhosis and heart failure: the duration of T1 / 2 increases without signs of cumulation, the likelihood of which is higher with chronic renal failure and hyperkalemia.

Edema syndrome in chronic heart failure (can be used as monotherapy and in combination with standard therapy).

States, in which secondary hyperaldosteronism can be detected, including cirrhosis of the liver, accompanied by ascites and / or edema, nephrotic syndrome and other conditions accompanied by edema.

Hypokalemia / hypomagnesemia (as an aid to its prevention during treatment with diuretics and when it is impossible to use other methods of correcting potassium levels).

To establish a diagnosis of primary hyperaldosteronism.

Hypersensitivity to the drug.

Veroshpiron is contraindicated in pregnancy and lactation.

If you need to use the drug during lactation, breastfeeding should be discontinued.

Side effects of the

From the side of metabolism: hyperuricemia, hypercreatininemia, increased concentration of urea, hyperkalemia, hyponatremia, metabolic hyperchloremic acidosis or alkalosis.

From the endocrine system: coarsening of the voice, in men - gynecomastia (the probability of development depends on the dose, duration of treatment and usually is reversible and after discontinuation Veroshpirona disappears, only in rare cases the mammary gland remains slightly increased), decreased potency and erection in women - menstrual irregularities, dysmenorrhea, amenorrhea, menorrhagia in the menopause, hirsutism, pain in the area of ​​the mammary glands, breast carcinoma (no connection with the drug has been established).

From the musculoskeletal system: muscle spasm, spasms of the calf muscles.

Increases the metabolism of phenazole.

Reduces the sensitivity of vessels to norepinephrine (requires caution when carrying out anesthesia).

Increases the toxic effect of lithium by reducing its clearance.

Accelerates the metabolism and elimination of carbenoxolone.

Increases the effect of diuretic and antihypertensive drugs.

ACS increase the diuretic and natriuric effect in hypoalbuminemia and / or hyponatremia.

Fludrocortisone causes a paradoxical increase in tubular secretion of potassium.

Reduces the effect of mitotane.

Treatment: gastric lavage, symptomatic treatment of dehydration and hypotension. In hyperkalemia, it is necessary to normalize the water-electrolyte metabolism with the help of potassium excreting diuretics, rapid parenteral administration of dextrose solution (5-20% solutions) with insulin at the rate of 0.25-0.5 IU per 1 g of dextrose, if necessary, re-introduction of dextrose. In severe cases, hemodialysis is performed.

Keep out of the reach of children at a temperature not exceeding 30 РC.