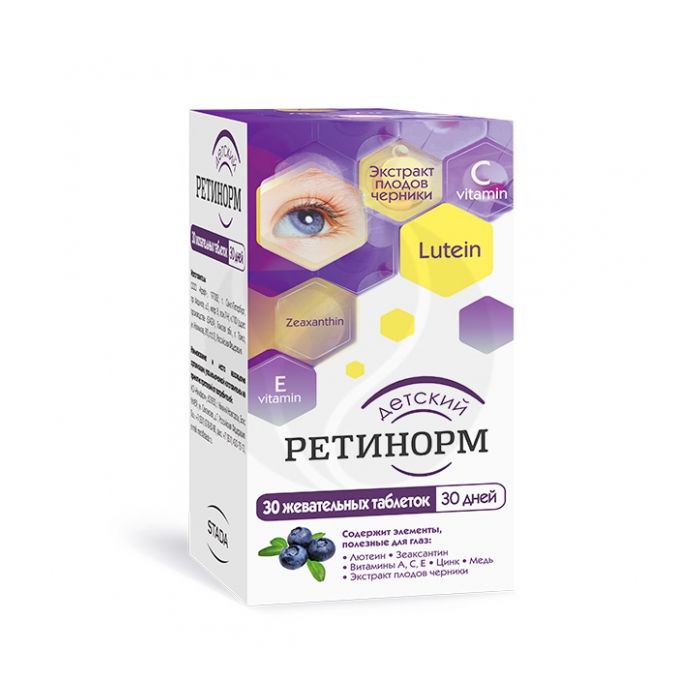 Skip to the beginning of the images gallery
Details
Retinorm children's chewable tablets BAA, No. 30

As a dietary supplement to food - an additional source of vitamins A, E, C, carotenoids lutein and zeaxanthin, trace elements zinc and copper - containing anthocyanins.

The recommended dose for children over 7 years old is 1 chewable table. in a day. Duration of admission - 1 month.

Children under 14 years of age take dietary supplements as agreed and under the supervision of a pediatrician.

Individual intolerance to the components.

Action on the body

Biologically active components of RETINORM for children are not synthesized in the human body, therefore they must be supplied from the outside with food or as part of a dietary supplement to food.

Most modern electronic devices used by children are sources of blue-violet radiation that damages the retina of the eye. The situation is complicated by intense visual stress during schooling.

The children's components included in RETINORM, replenishing the deficiency of basic nutrients in the child's body, help to normalize metabolic processes in the tissues of the eye and maintain the functional state of the visual apparatus under increased stress.

Lutein and Zeaxanthin. Plant carotenoids (lutein and zeaxanthin) accumulate in the macula and protect against aggressive blue-violet and UV radiation. Possessing high antioxidant activity, lutein and zeaxanthin block the action of free radicals, preventing damage to the eye tissue and contributing to the preservation of visual functions.

Blueberry fruit extract. Natural concentrated extract from blueberries, containing anthocyanins, protects the retina of the eye from negative effects, improves blood flow in the vessels of the fundus, stimulates the production of the pigment rhodopsin, which is necessary to improve the adaptation of the eyes in low light or dim light conditions.

Vitamins A, E and C. These are the most common antioxidants that enhance and complement each other's action, protecting the eye tissue from damage. Promote the restoration of visual pigments (rhodopsin and iodopsin) in rods and cones, which are responsible for normal light and color perception. They help to strengthen the walls and increase the elasticity of blood vessels, incl. fundus vessels. Participate in tissue respiration and other processes of cell metabolism. They have a neuroprotective effect. Helps strengthen the eye muscles and ligaments.

Zinc and copper. Essential trace elements to maintain vision function, have an antioxidant effect, and also compensate for the adverse effects of the environment. They help to improve the nutrition of the tissues of the fundus and maintain the functional state of the optic nerves. Insufficient consumption of these microelements can lead to visual impairment and increased eye fatigue. Zinc and copper are present in organic form as citrates, which are naturally occurring, bioavailable forms of minerals. Citrates contribute to the optimal absorption of trace elements by the body.

All the components that make up RETINORM for children provide protection of the visual apparatus from the negative effects of the environment, improve the functional state of the retina and normalize metabolic processes in the tissues of the eye of children, which can be impaired when:

- visual fatigue (use of telephones and computers, reading, activities in low light conditions);

- damage to the integrity of the eye tissues (during the recovery period after dysfunctions of the organ of vision).