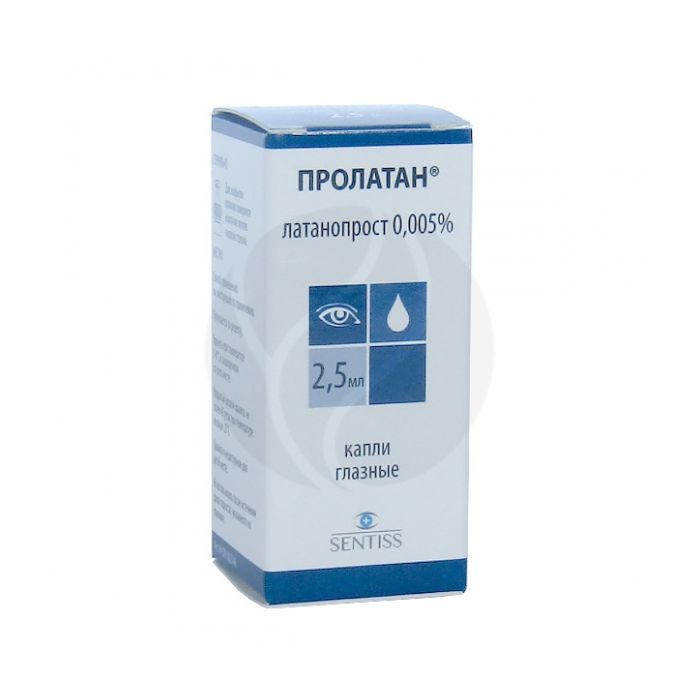 Skip to the beginning of the images gallery
Details
Prolatan eye drops 0.005%, 2.5 ml

Reduction of increased intraocular pressure (IOP) in adults and children (over the age of 1 year) with open-angle glaucoma or increased ophthalmotonus.

In adults and children over 1 year old - one drop into the affected eye (s) once a day. The optimal effect is achieved when using the drug in the evening. As with the use of any eye drops, in order to reduce the possible systemic effect of the drug, immediately after the installation of each drop, it is recommended to press on the lower lacrimal opening, located at the inner corner of the eye on the lower eyelid. This must be done within 1 minute.

Latanoprost - an analogue of prostaglandin F2? - is a selective agonist of FP receptors and reduces intraocular pressure (IOP) by increasing the outflow of aqueous humor, mainly by the uveoscleral route, as well as through the trabecular network. A decrease in IOP begins approximately 3-4 hours after drug administration, the maximum effect is observed after 8-12 hours, the effect lasts for at least 24 hours.

It was found that latanoprost has no significant effect on the production of aqueous humor and on the blood-ophthalmic barrier.

When used in therapeutic doses, latanoprost does not have a significant pharmacological effect on the cardiovascular and respiratory systems.

Latanoprost, being a prodrug, is absorbed through the cornea, where it is hydrolyzed to a biologically active acid. The concentration in aqueous humor reaches a maximum approximately 2 hours after topical application.

Vd is 0.16 ± 0.02 l / kg. Latanoprost acid is determined in aqueous humor during the first 4 hours, and in plasma - only within the first hour after topical application.

Latanoprost, being a prodrug, undergoes hydrolysis in the cornea under the action of esterases with the formation of biologically active acid. Latanoprost acid, entering the systemic circulation, is metabolized mainly in the liver by beta-oxidation of fatty acids to form 1,2-dinor- and 1.2.3,4-tetranor metabolites.

Systemic clearance is approximately 7 ml / min / kg. After beta-oxidation in the liver, metabolites are excreted mainly by the kidneys: after topical application, approximately 88% of the administered dose is excreted in the urine.

The following adverse reactions related to the use of the drug have been reported:

From the side of the organ of vision: eye irritation (burning sensation, feeling of sand in the eyes, itching, tingling and foreign body sensation); blepharitis; hyperemia of the conjunctiva; Pain in the eyes; increased pigmentation of the iris; transient punctate erosion of the epithelium, edema of the eyelids, perporbital edema, edema and erosion of the cornea; conjunctivitis; lengthening, thickening, increasing the number and increasing pigmentation of eyelashes and vellus hair; iritis / uveitis; keratitis; macular edema, incl. cystoid; a change in the direction of eyelash growth, sometimes causing eye irritation; blurred vision, photophobia, dryness of the mucous membrane of the eyes.

On the part of the skin and subcutaneous tissues: rash, darkening of the eyelid skin and local skin reactions on the eyelids, toxic epidermal nskrolysis.

From the nervous system: dizziness, headache.

Respiratory system: bronchospasm (including acute attacks or exacerbation of the disease in patients with a history of bronchial asthma), shortness of breath.

From the musculoskeletal system and connective tissue: muscle / joint pain.

There have also been cases of retinal artery embolism, retinal detachment and vitreous hemorrhage in patients with diabetic retinopathy.

There have been no adequate controlled studies in pregnant women. The drug should be prescribed during pregnancy only in cases where the potential benefit to the mother outweighs the possible risk to the fetus.

Latanoprost and its metabolites can be excreted in breast milk, therefore, the drug should be used with caution during breastfeeding.

Contraindicated in children under 1 year of age, because efficacy and safety have not been established.

The drug Prolatan should be used no more than once a day, since more frequent administration of latanoprost leads to a weakening of the IOP-lowering effect.

If one dose is missed, the next dose should be administered at the usual time.

Prolatan can be used concomitantly with other classes of topical ophthalmic drugs to lower IOP. If the patient is using other eye drops at the same time, then they should be applied at intervals of at least 5 minutes.

Prolatan contains benzalkonium chloride, which can be absorbed by contact lenses. Before instilling drops, contact lenses must be removed and reinserted after 15 minutes.

Prolatan can cause a gradual increase in the brown pigment content in the iris. The change in eye color is caused by an increase in the content of melanin in the stromal melanocytes of the iris, and not by an increase in the number of melanocytes themselves. Typically, brown pigmentation appears around the pupil and spreads concentrically to the periphery of the iris. In this case, the entire iris or parts of it become brown. In most cases, discoloration is minor and may not be clinically apparent. Increased pigmentation in the iris of one or both eyes is observed mainly in patients with a mixed iris color with a brown base. The drug has no effect on nevi and iris lentigo; accumulation of pigment in the trabecular meshwork or in the anterior chamber of the eye was not noted.

In connection with the use of latanoprost, cases of darkening of the eyelid skin have been described, which can be reversible.

Prolatan can cause gradual changes in eyelashes and vellus hair, such as lengthening, thickening, increased pigmentation, increased density and a change in the direction of eyelash growth. Eyelash changes are reversible and disappear after stopping treatment.

In patients using drops in only one eye, heterochromia may develop.

Influence on the ability to drive a car and other mechanisms

Drive a car or use complex equipment while using the drug with caution.

In addition to irritation of the mucous membrane of the eyes, hyperemia of the conjunctiva or episclera, other undesirable changes on the part of the organ of vision in case of an overdose of latanoprost are not known.

In case of accidental intake of the drug Prolatan inside, the following information should be taken into account: one bottle with 2.5 ml of solution contains 125 ?g of latanoprost, 5 ml - 250 ?g of latanoprost. More than 90% of the drug is metabolized during the first passage through the liver. Intravenous infusion at a dose of 3 ?g / kg in healthy volunteers did not cause any symptoms, however, when a dose of 5.5-10 ?g / kg was administered, nausea, abdominal pain, dizziness, fatigue, hot flashes and sweating were observed. In patients with moderate bronchial asthma, the introduction of latanoprost into the eyes at a dose 7 times higher than the therapeutic dose did not cause bronchospasm.

In case of an overdose, symptomatic treatment is performed.