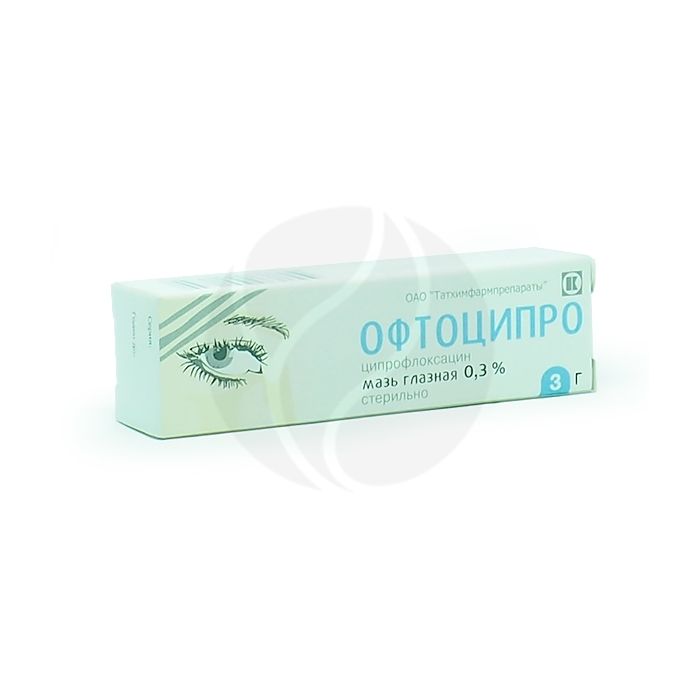 Skip to the beginning of the images gallery
Details
Ophtocypro eye ointment 0.3%, 3 g

Into the conjunctival sac.

Adults and children over 2 years old. A strip of ointment 1Ц1.5 cm long is placed behind the lower eyelid of the affected eye 3 times a day for 2 days. Then, within 5 days, the drug is used 2 times a day. In the case of the development of a severe infectious process, the ointment is applied every 3-4 hours, as the inflammation decreases, the frequency of the drug is reduced. The course of treatment should not exceed 14 days. To apply the ointment, gently pull the lower eyelid down and, lightly pressing the tube, insert a strip of ointment into the conjunctival sac. Then slowly release the eyelid and press it with a cotton swab or cotton swab for 1-2 minutes. After that, you should close your eyes for 1-2 minutes.

Suppresses bacterial DNA gyrase (topoisomerases II and IV, responsible for the process of supercoiling of chromosomal DNA around nuclear RNA, which is necessary for reading genetic information), disrupts DNA synthesis, growth and division of bacteria; causes pronounced morphological changes (including the cell wall and membranes) and rapid death of the bacterial cell.

It has a bactericidal effect on gram-negative organisms during dormancy and division (because it affects not only DNA gyrase, but also causes lysis of the cell wall), on gram-positive microorganisms - only during the period of division.

Low toxicity for cells of a macroorganism is explained by the absence of DNA gyrase in them. While taking ciprofloxacin, there is no parallel development of resistance to other antibiotics that do not belong to the group of gyrase inhibitors, which makes it highly effective against bacteria that are resistant, for example, to aminoglycosides, penicillins, cephalosporins, tetracyclines and many other antibiotics.

Most methicillin-resistant staphylococci are also resistant to ciprofloxacin. The sensitivity of Streptococcus pneumoniae, Enterococcus faecalis, Mycobacterium avium (located intracellularly) is moderate (high concentrations are required to suppress them).

Resistance develops extremely slowly, because on the one hand, after the action of ciprofloxacin, there are practically no persistent microorganisms, and on the other hand, bacterial cells do not have enzymes that inactivate it.

From the immune system: hypersensitivity reactions.

From the side of the organ of vision: often - precipitates on the cornea, discomfort in the eye, conjunctival injection; infrequently - keratopathy, punctate keratitis, corneal infiltrates, photophobia, decreased visual acuity, eyelid edema, blurred vision, eye pain, dry eye sensation, conjunctival and eyelid edema, lacrimation, discharge from the eyes, crusting at the edges of the eyelids, peeling of the skin eyelid, hyperemia of the eyelids; rarely - toxic phenomena from the organ of vision, keratitis, conjunctivitis, defect in the corneal epithelium, diplopia, decreased sensitivity of the cornea, asthenopia, barley.

From the side of the organ of hearing: rarely - pain in the ear.

From the respiratory system: rarely - increased secretion of the detachable mucous membrane of the paranasal sinuses, rhinitis.

On the part of the skin and subcutaneous tissues: rarely - dermatitis.

From the musculoskeletal system: the frequency is unknown - disorders of the ligamentous apparatus.

There are no data on the safety of topical use of ciprofloxacin during pregnancy, so its use is justified only in cases where the intended benefit to the mother outweighs the possible risk to the fetus.

Use in elderly patients

The drug is approved for use in elderly patients.

The use should be discontinued if any signs of hypersensitivity appear. The patient should be informed that if, after using the drops, conjunctival hyperemia continues or increases for a long time, then you should stop using the drug and consult a doctor.

Influence on the ability to drive vehicles and mechanisms

After using eye drops, a decrease in the clarity of visual perception is possible, therefore, immediately after instillation, it is not recommended to drive a car and engage in activities that require increased attention and speed of psychomotor reactions.

Taking into account the low systemic concentration of ciprofloxacin in plasma after instillation into the conjunctival cavity, the interaction between drugs used together with ciprofloxacin is unlikely.

In the case of joint use with other local ophthalmic drugs, the interval between their use should be at least 5 minutes, while eye ointments should be applied last.

Reviews
Write Your Own Review

News: We are looking for partners! If you have Paypal and you are ready to earn in our team - contact us!