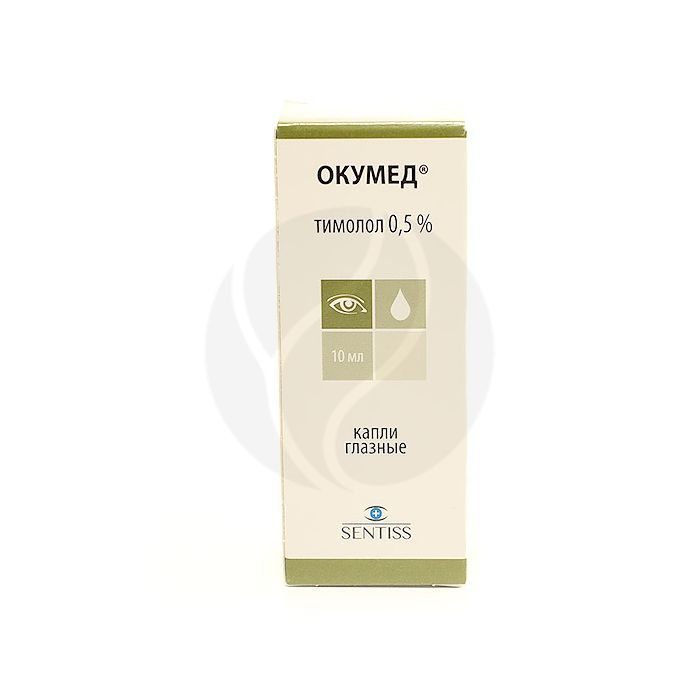 Skip to the beginning of the images gallery
Details
Okumed eye drops 0.5%, 10ml

The drug is intended for long-term constant use.

The patient should be warned that only the doctor can change the dose or temporarily cancel the drug.

Eye drops 0.5% in the form of a transparent, colorless solution.

timolol (in the form of maleate) 5 mg

Non-selective beta-blocker for topical use in ophthalmology. It has no internal sympathomimetic and membrane stabilizing activity. The drug reduces both normal and increased intraocular pressure by reducing the formation of intraocular fluid. Does not affect pupil size and accommodation. The effect of the drug is manifested 20 minutes after instillation into the conjunctival sac. The maximum decrease in intraocular pressure develops after 1-2 hours and lasts for 24 hours.

When applied topically, timolol quickly penetrates the cornea. After instillation of eye drops, Cmax of timolol in the aqueous humor of the anterior chamber of the eye is achieved after 1-2 hours. In a small amount it enters the systemic circulation by absorption through the vessels of the conjunctiva, nasal mucosa and lacrimal tract.

Timolol metabolites are excreted mainly by the kidneys. Pharmacokinetics in special clinical situations In newborns and young children, Cmax in blood plasma significantly exceeds that in adults.

From the side of the organ of vision: irritation and hyperemia of the conjunctiva, skin of the eyelids, burning and itching in the eyes, lacrimation or decreased lacrimation, photophobia, edema of the corneal epithelium, punctate superficial keratopathy, corneal hypesthesia, diplopia, ptosis, dry eyes, short-term visual acuity, blepharitis , conjunctivitis, keratitis. When carrying out surgical interventions for glaucoma, it is possible to develop detachment of the choroid in the postoperative period. From the side of the cardiovascular system: chest pain, heart failure, bradycardia, bradyarrhythmia, decreased blood pressure, collapse, AV blockade, cardiac arrest, transient cerebrovascular accident. From the respiratory system: rhinitis, shortness of breath, bronchospasm, pulmonary insufficiency. From the side of the central nervous system and peripheral nervous system: headache, dizziness,weakness, depression, paresthesia, myasthenia gravis, drowsiness, hallucinations, ringing in the ears, slowing down the speed of the psychomotor reaction. From the digestive system: nausea, vomiting, diarrhea. Allergic reactions: urticaria, eczema. Others: nosebleeds, decreased potency, alopecia.

There is no sufficient experience in the use of the drug during pregnancy and lactation (breastfeeding), therefore, the appointment of the drug is possible only in cases where the intended benefit of therapy for the mother outweighs the potential risk to the fetus or child. It was found that timolol crosses the placental barrier and is excreted in breast milk. Breastfeeding should be discontinued during treatment.

The patient should be warned about the need for regular measurement of intraocular pressure and examination of the cornea, as well as the need to stop using the drug and consult a doctor if side effects occur. When wearing soft contact lenses, you should not use Okumed eye drops, because the preservative contained in them can be deposited in soft contact lenses and have an adverse effect on the tissues of the eye. Rigid contact lenses should be removed before instilling the drug and reinstalled after 15 minutes. When transferring patients to Okumed treatment, it may be necessary to correct refraction (after the disappearance of the effects of previously used miotics). Okumed must be discontinued 48 hours before surgery with general anesthesia.Okumed should not be used simultaneously with antipsychotic (neuroleptics) and anxiolytic (tranquilizers) drugs. During the period of use of the drug, it is not recommended to consume alcohol (possibly a sharp decrease in blood pressure). Use in pediatrics

There is no sufficient experience in the use of the drug in children, therefore, the prescription of the drug is possible only in cases where the intended benefit of therapy outweighs the potential risk of side effects. Influence on the ability to drive vehicles and control mechanisms Immediately after using the drug, it is possible to reduce the clarity of vision and slow down psychomotor reactions, which can reduce the ability to engage in potentially hazardous activities that require increased attention (especially with the simultaneous use of alcohol).

The combined use of the drug Okumed with eye drops containing epinephrine can cause pupil dilation. The decrease in intraocular pressure is enhanced with the simultaneous use of eye drops containing epinephrine and pilocarpine. Two beta-blockers should not be instilled into the eyes. A decrease in blood pressure and a slowdown in the heart rate can increase when the drug is used together with blockers of slow calcium channels, reserpine and other beta-blockers. Concomitant use with insulin or oral antidiabetic agents can lead to hypoglycemia. Timolol enhances the effect of peripheral muscle relaxants (it is necessary to discontinue the drug 48 hours before the planned surgical intervention using general anesthesia).