LUCRIN DEPOT
Skip to the end of the images gallery 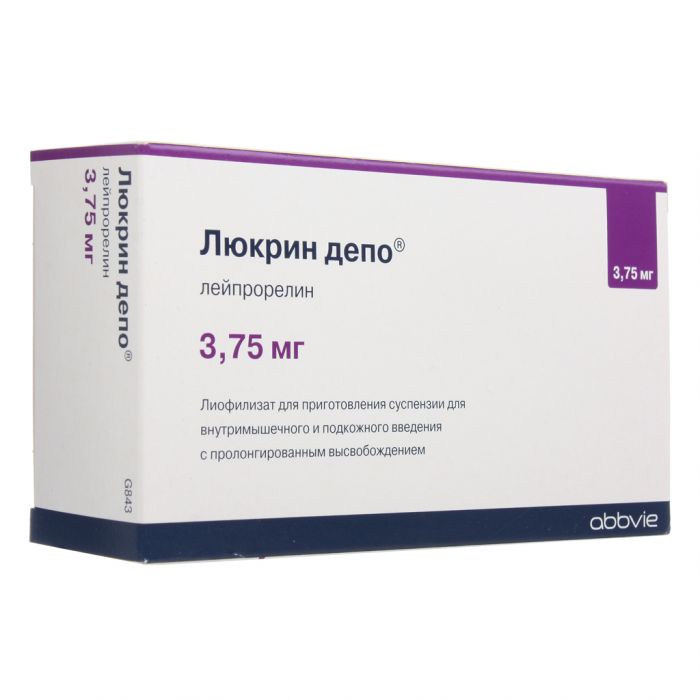 Lyophilisate for the preparation of a suspension for intramuscular and subcutaneous administration of a prolonged action.

In 9 ml clear glass bottles of 44.1 mg lyophilisate (complete with solvent - 2 ml ampoule with two blister packs with sterile needles and a disposable syringe with a napkin soaked in 70% isopropyl alcohol). In a cardboard box 1 set.

Suppression of steroidogenesis in the ovaries and testicles is a reversible process and ceases after the end of therapy.

After a single i / m and s / c administration of leuprorelin in patients with prostate cancer at doses of 3.75 and 7.5 mg, the average plasma concentrations of the drug at the end of the first month were 0, 7 and 1 ng / ml, respectively.

Average Vss - 27 L Binding to plasma proteins - 43–49%. Systemic clearance - 7.6 l / h. T1 / 2 - about 3 hours. Leiprorelin, being a peptide, undergoes metabolic degradation, mainly peptidase, to shorter inactive peptides - pentapeptide (metabolite I), tripeptides (metabolites II and III) and dipeptide (metabolite IV). The time to reach Cmax of the main MI metabolite is 2–6 hours and corresponds to 6% of Cmax of leuprorelin. 1 week after injection, the average concentration of MI in the plasma is 20% of the average concentration of leuprorelin.

The pharmacokinetics of the drug in patients with impaired liver or kidney function has not been investigated.

Progressive prostate cancer (palliative treatment), including when orchiectomy or estrogen treatment is not indicated or is not applicable in this patient

uterine fibromyoma (for a period of up to 6 months as a preoperative preparation for removal of fibroids or hysterectomy, and also for symptomatic treatment and improvement in menopausal women who refuse surgery)

perimenopausal breast cancer in combination with

The drug is contraindicated in pregnancy and lactation, therefore, it is recommended to exclude the presence of pregnancy before using the drug.

IM or s / c, 1 time per month. The injection site should be changed periodically. A suspension for injection is prepared immediately before administration using the supplied solvent at a concentration of 3.75 mg / 1 ml.

For prostate or breast cancer, a single dose is 3.75 mg. The duration of treatment is determined by the doctor.

With endometriosis, uterine fibroids, a single dose is 3.75 mg.

For women of reproductive age, the first injection is carried out on the 3rd day of menstruation. The duration of treatment is not more than 6 months.

The initial dose can be determined based on the child’s body weight:

Number of syringes or bottles for injection

Note: if 2 or more injections are necessary to obtain the desired total dose, they must be administered simultaneously.

If complete suppression of disease progression is not achieved, the dose should be increased every 4 weeks by 3.75 mg.

Withdrawal of the drug Lucrin Depot® should be considered before reaching the age of 11 years in girls and 12 years in boys.

Instructions for preparing the suspension and injecting Lucrin Depot® in vials:

1. Pour 1 ml of the solvent from the ampoule into the syringe with the needle in the kit and put it into the vial with lyophilisate (the remaining solvent should be disposed of).

2. Shake the vial well until a homogeneous suspension is obtained. The suspension becomes milky.

3. Immediately after dilution, fill the entire contents of the vial (or 2 vials) into a syringe (maximum 2 ml per syringe) and make a subcutaneous or intramuscular injection. Although the prepared suspension of Lucrin Depot® remains stable for 24 hours after dilution, it should be used immediately after preparation. The remainder of the drug must be disposed of.

1. Screw the white piston into the end plug until the plug starts to rotate.

2. Hold the syringe upright. Introduce the solvent by slowly pressing (for 6–8 s) on the piston until the first plug is on the blue line in the middle of the syringe.

3. Continue to hold the syringe upright. With gentle shaking, mix the lyophilisate thoroughly with the solvent until a uniform suspension (suspension) is formed. The suspension becomes milky.

4. Hold the syringe upright. With the other hand, lift the needle cap up without unscrewing it.

5. Hold the syringe upright. Push the piston forward to remove air from the syringe.

On the part of the blood and blood-forming organs: anemia, thrombocytopenia, leukopenia, leukocytosis, neutropenia, increased PV and partial thromboplastin time.

From the side of the respiratory system: cough, shortness of breath, nosebleeds, hemoptysis, pharyngitis, pleural effusion, fibrotic lesions in the lungs, lung infiltrates, respiratory distress.

On the part of the sensory organs: impaired vision and hearing, ringing in the ears, dry eyes, amblyopia.

Pharmacokinetic studies on the drug interaction of Lucrin depot® with other drugs have not been performed. However, since leuprorelin is a substance of peptide nature and undergoes primary decay under the influence of peptidase rather than cytochrome P450 enzymes and about 46% of the drug binds to plasma proteins, drug interaction is unlikely.

overdose There are no data on the overdose of leuprorelin in humans. Administration of leuprorelin to patients with prostate cancer at a dose of up to 20 mg / day for 2 years did not cause the development of adverse events other than those observed with the drug at a dose of 1 mg / day.

In case of overdose, the patient should be prescribed symptomatic treatment.