Tablets
Skip to the end of the images gallery 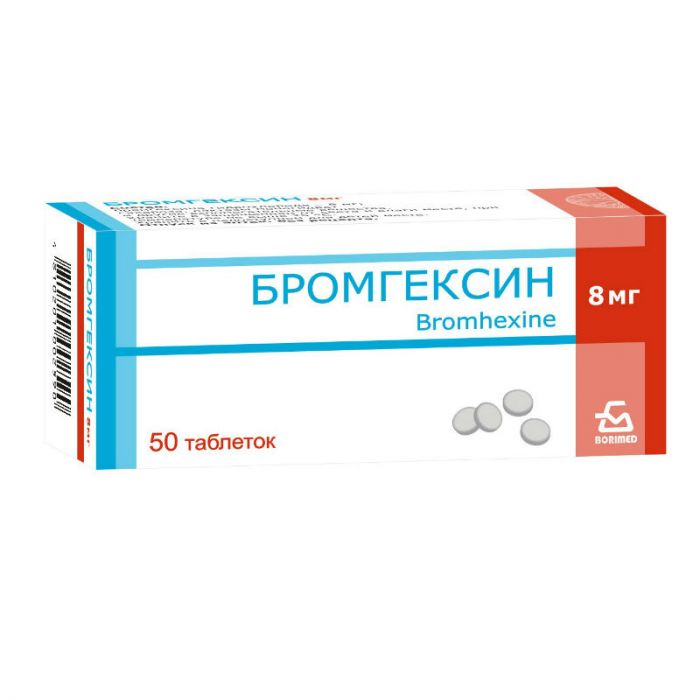 Skip to the beginning of the images gallery
Details
Release form

Bromhexine has a mucolytic (secretolytic) and expectorant effect. The mucolytic effect is associated with the depolymerization and liquefaction of mucoprotein and mucopolysaccharide fibers. Bromhexine has a weak antitussive effect. It stimulates the production of endogenous surfactant, which ensures the stability of alveolar cells during respiration. The clinical effect is manifested after 2-5 days from the start of treatment with the drug.

When taken orally, bromhexine is almost completely absorbed (99%) within 30 minutes. Bioavailability is 20-25% (effect of the first passage through the liver). In plasma, bromhexine firmly binds to 95% proteins, penetrates the blood-brain and placental barriers. In the liver, bromhexine undergoes demethylation and oxidation. The half-life is 15 hours due to slow back diffusion from the tissues. It is excreted by the kidneys. In chronic renal failure, the excretion of bromhexine metabolites is impaired. With repeated use, bromhexine can accumulate.

Hypersensitivity to bromhexine and / or to any auxiliary component of the drug, including lactose and sucrose, gastric ulcer and 12 duodenal ulcer in the acute phase, pregnancy (I trimester), lactation, childhood (up to 3 years).

During pregnancy and lactation, bromhexine is used in cases where the expected benefits to the mother outweigh the potential risk to the fetus or baby.

For gastric ulcer, as well as for indications of a history of gastric bleeding, bromhexine should be used under medical supervision.

Use with caution in patients with bronchial asthma.

Bromhexine is not used concurrently with medicines containing codeine, because this makes it difficult to cough up liquefied sputum.

Tablets should be taken orally, after meals, with plenty of fluids.

Children and adolescents from 6 to 14 years old, as well as persons weighing less than 50 kg, 1 tablet (8 mg) 3 times a day. Children under 6 years of age should take lower dosage forms.

Children under 6 years of age should take lower dosage dosage forms of bromhexine and only on the advice of a doctor.

Therapeutic effect may occur on day 4-6. The course of treatment is from 4 to 28 days (determined individually depending on the indications and course of the disease). Patients with renal failure or impaired liver function are prescribed lower doses or increase the interval between doses.

Side effects of the

From the digestive system: dyspeptic symptoms, transient increase in the activity of hepatic transaminases in the blood serum.

From the side of the central nervous system: headache, dizziness.

From the respiratory system: cough, bronchospasm.

Bromhexine can be prescribed concurrently with other drugs used in the treatment of bronchopulmonary diseases.

Bromhexine is not prescribed simultaneously with antitussive drugs (including those containing codeine), because they may make it difficult to cough up Bromhexine-diluted sputum.

Bromhexine is not compatible with alkaline solutions.

Store at a temperature not exceeding 25 РC.

Conditions of sale from

For adults, Pregnant women II and III trimester as prescribed by a doctor, Children over 3 years old