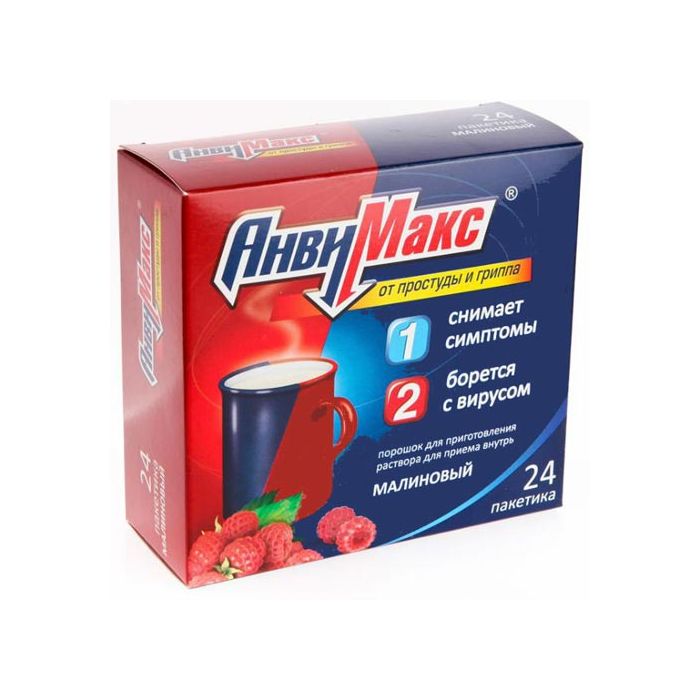 Powder for preparation of oral solution.

The combined drug has antiviral, interferonogenic, antipyretic, analgesic, antihistamine and angioprotective effect. Paracetamol has analgesic and antipyretic effects. Ascorbic acid is involved in the regulation of redox processes, promotes normal capillary permeability, blood clotting, tissue regeneration, plays a positive role in the development of immune responses of the body, replenishes vitamin C deficiency.Calcium gluconate, as a source of calcium ions, prevents the development of increased permeability and fragility of blood vessels causing hemorrhagic processes in influenza and acute respiratory viral infections, has an anti-allergic effect (the mechanism is unclear). Rimantadine has antiviral activity against influenza A. By blocking M2 channels of influenza A virus,violates its ability to penetrate cells and release ribonucleoprotein, thereby inhibiting the most important stage of viral replication. Induces the production of interferons alpha and gamma. In influenza caused by the B virus, rimantadine has an antitoxic effect. Rutoside is an angioprotective agent. Reduces capillary permeability, swelling and inflammation, strengthens the vascular wall. It inhibits aggregation and increases the degree of erythrocyte deformation. Loratadine - a blocker of histamine H1 receptors, prevents the development of tissue edema associated with the release of histamine. Pharmacokinetics Paracetamol Absorption and distribution Absorption - high. According to the results of clinical studies, the following pharmacokinetic parameters of paracetamol were established: Cmax in blood plasma is achieved when the powder is applied after 0.7 ± 0.39 hours and is 4.79 ± 1.81 μg / ml. Plasma protein binding - 15%. Penetrates the BBB. Metabolism and excretion Metabolized in the liver by three main pathways: conjugation with glucuronides, conjugation with sulfates, oxidation by microsomal liver enzymes. In the latter case, toxic intermediate metabolites are formed, which are subsequently conjugated with glutathione, and then with cysteine ​​and mercapturic acid. The main isoenzymes of cytochrome P450 for this metabolic pathway are the isoenzyme CYP2E1 (mainly), CYP1A2 and CYP3A4 (minor role). When glutathione is deficient, these metabolites can cause damage and necrosis of hepatocytes. Additional metabolic pathways are hydroxylation to 3-hydroxyparacetamol and methoxylation to 3-methoxyparacetamol, which are subsequently conjugated to glucuronides or sulfates.In adults, glucuronidation predominates. Conjugated paracetamol metabolites (glucuronides, sulfates and conjugates with glutathione) have low pharmacological (including toxic) activity. It is excreted by the kidneys in the form of metabolites, mainly conjugates, only 3% unchanged. According to the results of clinical studies, T1 / 2 of paracetamol is 2.73 ± 0.76 hours. Pharmacokinetics in special clinical cases In elderly patients, the clearance of the drug decreases and T1 / 2 increases. Ascorbic acid Absorption and distribution Absorbed in the gastrointestinal tract (mainly in the jejunum). Diseases of the gastrointestinal tract (peptic ulcer of the stomach and duodenum, constipation or diarrhea, helminthic invasion, giardiasis), the use of fresh fruit and vegetable juices, alkaline drinks reduce the absorption of ascorbic acid in the intestine.The concentration of ascorbic acid in plasma is normally approximately 10-20 μg / ml. Time to reach Cmax in blood plasma after administration

In a dry place, at a temperature not exceeding 25 degrees.

Adults are prescribed orally 1 sachet 2-3 times / day after meals for 3-5 days (no more than 5 days) until the symptoms of the disease disappear.

If there is no improvement in health, the drug should be discontinued and a doctor should be consulted.

The contents of 1 sachet should be dissolved in half a glass of boiled warm water and drunk immediately after dissolution.

Stir the solution before use.