Diphereline
Skip to the end of the images gallery 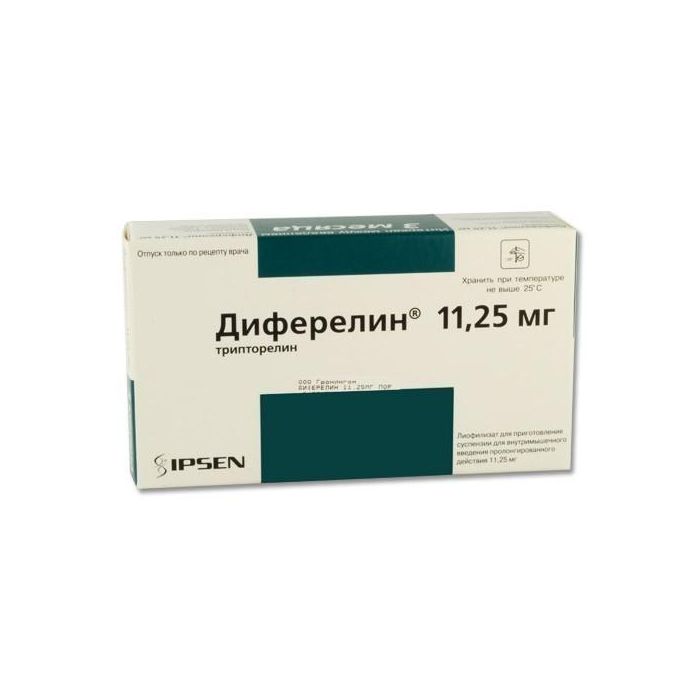 Lyophilisate for suspension for v / m administration of prolonged action.

Prostate cancer: treatment of locally advanced prostate cancer in monotherapy or as an adjuvant against radiation therapy

Hypersensitivity to triptorelin, other components of the drug, or other GnR analogues.

Caution: the drug should be prescribed for osteoporosis, women with polycystic ovary syndrome.

DiferelinВ® is contraindicated in pregnancy and lactation (breastfeeding).

Since there is no data on the excretion of tryptorelin in breast milk and its possible effects on a breast-fed baby, treatment with DiferelinВ® should not be carried out during breast-feeding.

According to available data, no teratogenic effects were found in experimental animal studies. In isolated cases of the use of GnRH analogues (by negligence), no defects in fetal development and fetotoxicity were found.

* - taking into account the characteristics of the dosage form, the drug contains an excess of the active substance to ensure the introduction of an effective dose.

Dosage and administration of

With endometriosis, the drug is administered IM in a dose of 11, 25 mg every 3 months. Treatment must begin in the first 5 days of the menstrual cycle. The duration of treatment depends on the severity of endometriosis and the observed clinical picture (functional and anatomical changes) during therapy. As a rule, treatment is carried out for 3-6 months. It is not recommended to conduct a second course of treatment with triptorelin or another GnRH analogue.

Rules for the preparation of suspension

Dissolution of the lyophilisate in the supplied solvent should be carried out immediately before administration. Mix the contents of the vial with caution until a homogeneous suspension is obtained.

Cases of incomplete injection resulting in the loss of more suspension than usually remains in the injection syringe should be reported to your healthcare provider.

Introduction should be carried out in strict accordance with the instructions.

Patient should be prone.

Break the neck of the ampoule (dot on the front side of the top).

Put the solvent into the syringe with the needle.

Remove the green protective plastic cap from the top of the vial.

Transfer the solvent to the lyophilisate vial.

Pull the needle so that it remains in the vial but does not touch the suspension.

Without turning the bottle over, gently shake the contents until a homogeneous suspension is obtained.

Check the absence of agglomerates before filling the suspension into a syringe (if there are no agglomerates, shake until completely homogeneous).

Without turning the bottle over, draw the entire suspension into the syringe.

remove the needle, used to prepare the suspension, and firmly attach the other needle to the tip of the syringe. Hold on to the color tip only.

Remove air from the syringe.

Dispose of needles in sharps containers.

At the beginning of treatment: dysuria (difficulty urinating, incomplete emptying of the bladder, soreness), bone pain, associated with metastases and compression metastases of the spinal cord, which may be aggravated due to a temporary increase in testosterone in the blood plasma at the beginning of treatment. These symptoms disappear in 1-2 weeks. Also, during this period, a temporary increase in the activity of liver enzymes in blood plasma may be observed.

During treatment: hot flashes, decreased libido, gynecomastia, impotence, which is associated with a decrease in testosterone in plasma.

At the beginning of treatment: symptoms associated with endometriosis (pelvic pain, dysmenorrhea), which may be aggravated by the initial transient increase in the concentration of estradiol in blood plasma and disappear after 1-2 weeks. 1 month after the first injection, genital bleeding may occur, including both menorrhagia and metrorrhagia.

In men and women

Long-term use of GnRH analogues can lead to bone demineralization and is a possible risk factor for osteoporosis.

The drug interaction of Diferelin® has not been described.

There are no known cases of overdose with Difrelin® so far.

Keep out of the reach of children at a temperature not exceeding 25 РC.