Capsules.
Skip to the end of the images gallery 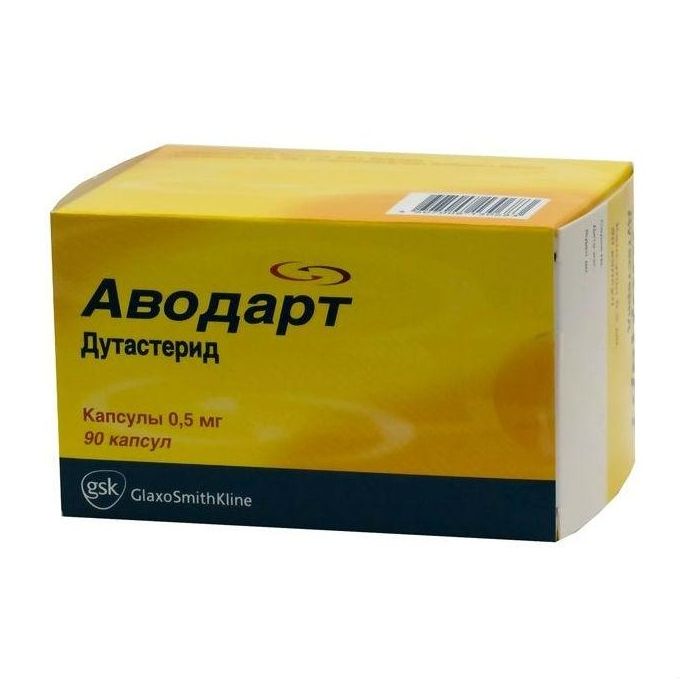 Skip to the beginning of the images gallery
Details
Release form

A drug for the treatment of benign prostatic hyperplasia.

The maximum effect of dutasteride on lowering the concentration of DHT is dose-dependent and is observed 1-2 weeks after the start of treatment.

After 1 and 2 weeks of taking dutasteride at a dose of 500 mcg / day, the average serum dihydrotestosterone concentrations are reduced by 85% and 90%.

Hypersensitivity to dutasteride and other components of the drug.

Hypersensitivity to other 5ОІ-reductase inhibitors.

AvodartВ® is contraindicated in women and children.

Caution: the drug should be prescribed for liver failure.

Effect on fertility: the effect of dutasteride in a daily dose of 500 μg on sperm characteristics was studied in healthy volunteers aged 18-52 years.

By the 52nd week of treatment, the average values ​​of the percentage reduction in the total sperm count, sperm volume, and sperm motility were 23%, 26%, and 18%, respectively, compared to the baseline. The concentration of sperm and their morphological characteristics did not change.

After 24 weeks of observation, the average percentage change in the total sperm count in the dutasteride group remained 23% lower than the baseline.

The average value for all sperm parameters at all time points remained within the normal range and did not meet the criteria for a clinically significant change (30%), at the 52nd week of treatment, in two volunteers in the dutasteride group, the total sperm count decreased by more than 90% compared to the initial level, with partial recovery at the 24th week of observation. Thus, the clinical significance of the effect of dutasteride on sperm counts and on the individual fertility of the patient is unknown.

Pregnancy: Dutasteride is contraindicated in women. Dutasteride has not been studied in women since preclinical data indicate that suppression of the level of DHT can inhibit the development of the external genitalia in the fetus.

Lactation: There is no data on the penetration of dutasteride into breast milk.

Heart failure with the combined use of dutasteride and tamsulosin

In two 4-year clinical trials, the incidence of heart failure was higher in patients receiving a combination of dutasteride and alpha1-blocker, mainly tamsulosin, than in patients not receiving combined treatment. In these two studies, the incidence of heart failure remained low ( 1%) with some variability between them. But in general, there were no discrepancies in the frequency of side effects from the cardiovascular system. A causal relationship between treatment with dutasteride (as monotherapy or as a combination with alpha1-blocker) and the development of heart failure has not been established.

In patients, it is necessary to conduct a digital rectal examination, as well as use other methods for examining the prostate, before treatment with dutasteride and periodically repeat them during treatment to exclude development Prostate cancer.

Determining serum PSA concentration is an important component of screening for PCa. After a 6-month treatment with dutasteride, the average serum PSA level decreases by about 50%. Patients taking dutasteride should be given a new baseline PSA level after 6 months of therapy. In the future, it is recommended to regularly monitor the level of PSA.

The use of dutasteride does not affect the diagnostic value of PSA levels as a marker of prostate cancer. Any confirmed increase in PSA level relative to its lowest value in the treatment with dutasteride may indicate the development of prostate cancer (in particular, prostate cancer with a high degree of differentiation according to the Gleason score) or non-compliance with the dutasteride therapy regimen and should be carefully evaluated, even if these PSA levels remain in within normal values вЂ‹вЂ‹for this age category of patients not taking 5ОІ-reductase inhibitors.

Total PSA returns to baseline within 6 months after dutasteride withdrawal.

The ratio of free PSA to total remains constant even with dutasteride therapy. If the determination of the percentage of PSA free fraction is additionally used to detect PCa in men receiving dutasteride, correction of this value is not required.

No effect of long-term administration of dutasteride on the development of breast cancer in men.

A 4-year study (REDUCE) compared placebo and dutasteride in 8,231 volunteers aged 50 to 75 years old with a negative biopsy for prostate cancer and a PSA level of 2, 5 ng / ml to 10 ng / ml during the initial examination.

A causal relationship between dutasteride intake and the development of high grade PCa has not been established.

Men taking dutasteride should be tested regularly for risk assessment of PCa, including PSA levels.

Influence on the ability to drive vehicles and operate machinery

Taking dutasteride does not affect car driving or working with machinery.

Dosage and administration of

The drug can be taken without regard to meals.

Capsules should be swallowed whole, not chewed or opened, as the contents of the capsule may cause irritation of the mucous membrane of the oropharynx.

Adult men (including the elderly) the recommended dose of Avodart® is 1 capsule (500 mcg) 1 time / day. Capsules should be taken whole.

Although improvement with the use of the drug occurs fairly quickly, treatment should be continued for at least 6 months in order to objectively evaluate the therapeutic effect.

For the treatment of BPH, Avodart® can be prescribed as monotherapy or in combination with alpha1-blockers.

Less than 0.1% of the dose is excreted through the kidneys when taking 500 mcg / day, so there is no need to reduce the dose in patients with impaired renal function.

On the part of the immune system: very rarely - allergic reactions (including rash, itching, urticaria, localized edema) and angioedema.

From the skin and subcutaneous fat: rarely - alopecia (mainly loss of body hair) or hypertrichosis.

In vitro dutasteride is metabolized by the cytochrome P450 enzyme isoenzyme CYP3A4. In the presence of CYP3A4 inhibitors, blood dutasteride concentrations may increase.

In vitro dutasteride is not metabolized by the following isoenzymes of the human cytochrome P450 system: CYP1A2, CYP2A6, CYP2E1, CYP2C8, CYP2C9, CYP2C19 and CYP2D6.

In vitro, dutasteride does not displace warfarin, acenocoumarol, fenprocoumon, diazepam and phenytoin from the sites of their binding to plasma proteins, and these drugs, in turn, do not displace dutasteride.

When conducting studies on the interaction of dutasteride with tamsulosin, terazosin, warfarin, digoxin and colestyramine in humans, no clinically significant pharmacokinetic or pharmacodynamic interactions were noted.

Symptoms: Dutasteride up to 40 mg / day once (80 times higher than the therapeutic dose) was not observed within 7 days of significant adverse effects. In clinical trials, patients received dutasteride at a dose of 5 mg daily for 6 months, with no additional adverse effects observed on the background of 500 μg of dutasteride.

Treatment: There is no specific antidote to dutasteride, so it is sufficient to carry out symptomatic and supportive treatment in case of overdose.

Keep out of the reach and sight of children at temperatures not exceeding 30 РC.